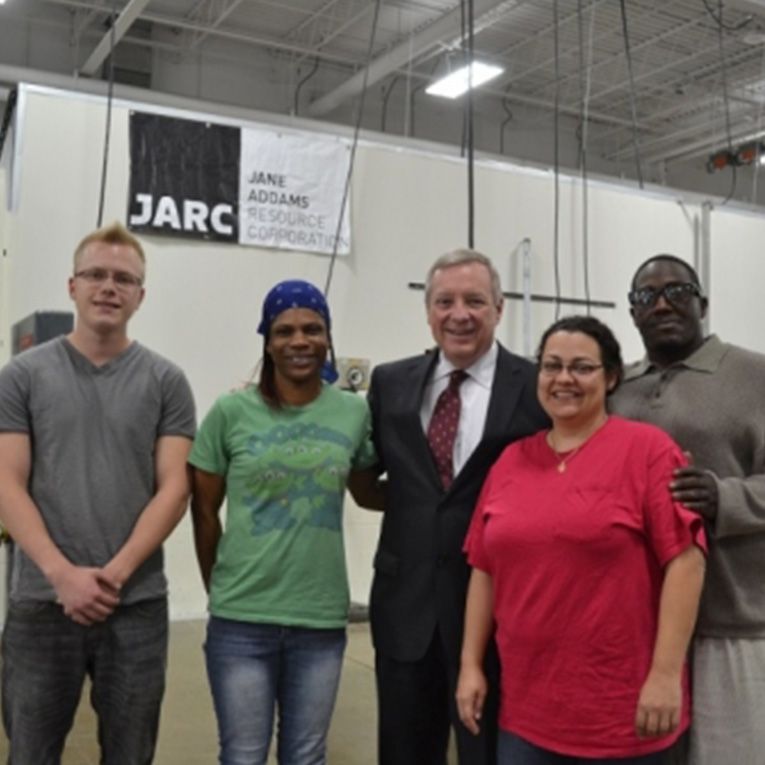 In 2014, Lamont was experiencing homelessness and trying to get his life back on track.

But the only options available to him based on prior experience—sales and customer service—were not very appealing as long-term career paths. An employment coordinator at the shelter suggested that he contact Jane Addams Resource Corporation (JARC).

He did a bit of research on manufacturing and found that it was a thriving field with a need for committed employees. He also kept coming across three letters, over and over: “CNC”. “All the [job postings] said ‘CNC’ so I wondered, ‘What is that?’” He noticed that the salaries posted were quite good so he had to learn more. “This was a new start in my life,” he says. “I didn’t hesitate—I had nothing to lose.”

At first, math was a challenge. In order to begin the CNC course, he needed to master trigonometry and coordinates. So he worked with a tutor three times a week. His efforts paid off; in September 2014, Lamont became one of the first three trainees to attend the inaugural sessions of the CNC program at JARC's newest site, Metro West, in DuPage County.

Lamont was hooked from day one. A college course in robotics had ignited a passion for programming, and he was glad to continue to build on that initial exposure to the field. He also began to get the rest of his life in order so that he would be prepared to work. The path to employment involved a lot of “crossing t’s and dotting i’s” as Lamont puts it. For instance, his driver’s license had been suspended, and JARC partner the Alliance for Illinois Manufacturing (AIM) helped him pay some of his traffic fines. AIM also assisted him with transportation, even to the courthouse.

On May 12th 2015, after eight months in the program, he began working as a Material Handler/Injection Molding Machine Operator at Tri-Sure. He clocks in at 6 PM every day and prepares to run and monitor all of the machines on the floor overnight. Occasionally, he runs into an alarm but he is confident in his ability to fix those issues independently. He continues to develop his skills on the job. He was recently trained to operate a forklift and looks forward to more opportunities to learn the field.

The work environment has also been outstanding. “I love my co-workers,” he enthuses. “And when I first started working, the boss came on site, sought me out, and [welcomed me to the company].” Lamont also appreciates that the company demonstrates concern in his health and well-being. He is a double amputee and has two prosthetics legs from the waist down. Working 12hrs a day with heavy machinery was hard on his body at first; one day, his legs started to swell and he had to go to the hospital. But, Tri-Sure provides ongoing support, such as permission to take breaks as needed.

This month, we celebrate the one year anniversary of the opening of our DuPage-based Metro West Careers in Manufacturing Programs.

JARC is a leader in workforce development in Chicago, yet the geography of poverty has changed. Between 2010 and 2011, poverty in the Chicago suburbs increased by 99% (Brookings Institute). At the same time DuPage County has the second largest manufacturing base in Illinois. Its employers are facing a “skills gap” due to an aging workforce, emerging technologies, and the decline of trades in schools (Alliance for Illinois Manufacturing). The skills gap presents particularly feasible opportunities for low-income suburban residents, as many of these jobs are located in the suburbs.

In Addison, JARC partners with AIM to offer comprehensive services for its trainees. JARC recruits and screens candidates as well as provides the job training and financial support services to all trainees. The Alliance for Illinois Manufacturing utilizes its vast network of manufacturing employers throughout the Chicago region to place graduates in good-paying manufacturing jobs.

To date, JARC has trained 39 jobseekers through the Metro West Careers in Manufacturing Programs. Including Lamont, 13 have already been placed into full-time employment at an average starting wage of $12.75. 41 industry credentials have been earned, and 20 trainees are currently enrolled in training.

Metro West looks forward to continuing to refine its services to better serve DuPage County residents like Lamont in its second year and beyond. By adapting its programs to local needs, JARC plans to reflect thoughtfully on lessons learned to place more suburban clients on the path to self-sufficiency.