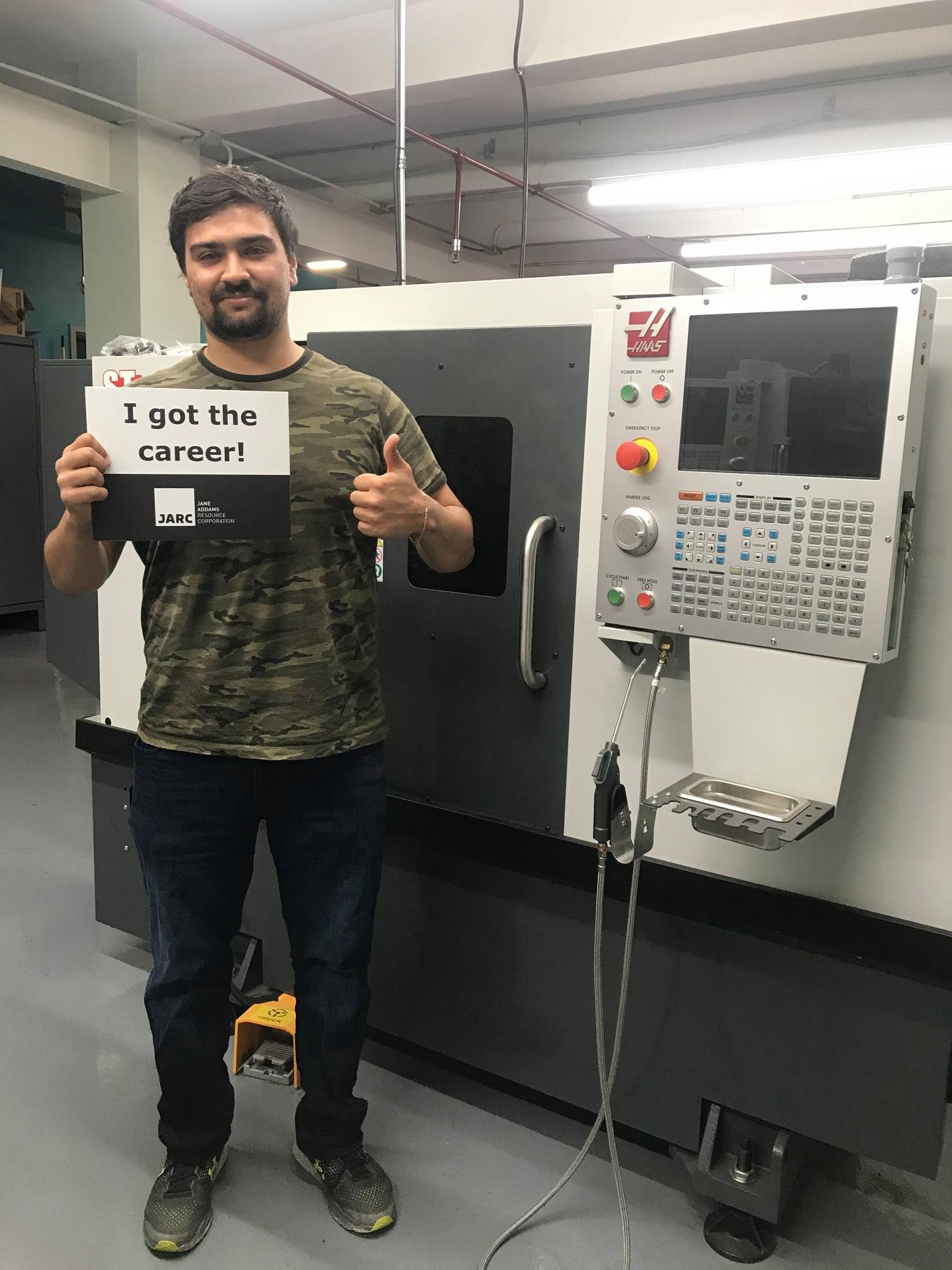 Richard was struggling to find a stable career path before entering JARC. “Everything shut down due to COVID, and I was unemployed. I worked in restaurants and hospitality, but never had a stable income.”

He originally went to college at DePaul on an Accounting scholarship. “I took a job that I wasn’t interested in at the time and wasn’t able to stay focused.” He wanted to start over and did some soul-searching, but never found a field that he wanted to stick with.

“The restaurant work was fine when I was single and just caring for myself, but right around when COVID hit, I became more serious with my girlfriend, who has two kids. I became more of a father figure and wanted to support them. They looked up to me, so I wanted to get more serious about a career. Around the same time, I lost my restaurant job due to COVID, and then everything lined up for me after that.”

Richard’s uncle, who works in CNC at S&C Electric Company, told him about the field. Richard mentioned CNC to his girlfriend, and she came across JARC online shortly after. “Everything happened for a reason, but it all just worked out and lined up at the perfect time in my life.”

Richard was quickly accepted to JARC and began in the CNC program. He mentioned that all of the supportive services were extremely helpful to him throughout training. “As soon as I was accepted, everyone reached out to me to help. I received a ton of help financially, and for the first time, I established a loan to build credit. They also helped me with gas and transportation, and all of my CNC equipment.

He was particularly thankful for our Ema, JARC’s Austin Program Coordinator, and Darryl, JARC’s Austin Employment Coach. “Ema was so helpful throughout the entire process. I was struggling with some things at first, and she was there for me through it all. Darryl helped with mock interviews and my resume. I hadn’t touched up my resume in several years, and he helped make my resume professional-looking.”

When discussing the greatest lesson he learned at JARC, he said it was the importance of completing school. It had been 10 years since he was in college, but he said that following through with his program at JARC paid off in so many ways. “I’m so grateful for the opportunity to have been accepted and for the fact that it was free.”

Richard now works full-time at Sloan Valve as a CNC set up and operator. He said his favorite part of the job is working on all of the different machines. “I’m lucky to have gotten the position at Sloan. It is a large company with a ton of growth potential. There’s so much opportunity to move around and I never get bored.”

Richard currently makes $22.86 and has full medical benefits. He mentioned that he would love to eventually go back to school for engineering, and continue to work at Sloan and move up within the company.

“A big thank you to everyone at JARC. It’s a well-organized program, and allows you to get a new career. The program is easy to learn and does not cost anything. JARC was a blessing.”